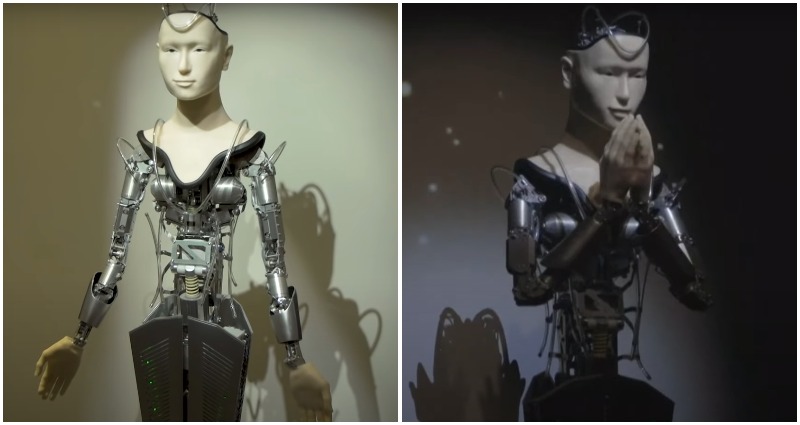 Worshipers at a Buddhist temple in Kyoto, Japan, have Buddhist sermons and scriptures read to them by a robot inspired by the Buddhist goddess of mercy, Kannon.

Inside Kodaiji Temple is a 6-foot-4, 132-pound robot named “Mindar” scheduled to deliver a 25-minute sermon on the Heart Sutra. Made of silicone skin and aluminum body parts, the robot has a built-in camera in its left eye to allow eye contact with congregants during sermons and teachings. Mindar’s hands and torso were also designed to replicate human movements and interactions.

Mindar was a million dollar project devised by a team led by Professor Ishiguro Hiroshi from the Department of Systems Innovation at Osaka University and Kodaiji Temple in 2019. The goal of the project was to renew the people’s interest in Buddhism, which has declined due to generational change and modernism in Japan, and to encourage devotees to use their imaginations. Ishiguro explained that Mindar was designed to have ambiguous gender and age so devotees could imagine their own Buddha image.

The robot also includes interactive 3D projection mapping that allows it to display worshipers on a wall behind it. Devotees in these projected videos ask Mindar questions about Buddha’s teachings, which he responds with direct and articulate answers.

More from NextShark: A Korean left beaten in a parking lot at La Source in OC

Kodaiji Temple’s chief steward, Goto Tensho, hopes to include more advanced features for Mindar, as it is currently limited to pre-scheduled sermons.

“We plan to implement AI so that Mindar can accumulate unlimited knowledge and speak independently. We also want to have separate sermons for different age groups to facilitate teachings,” Goto told ABC News .

Regarding concerns that Mindar violates a religious domain, Goto explained that Buddhism is about following the way of Buddha rather than worshiping a god.

“Buddhism is not a belief in a God, it pursues the path of Buddha,” Goto said. CNN. “It doesn’t matter whether it’s represented by a machine, a piece of junk or a tree.”

Characteristic image via The Hindu (right) and DW Offset (left)