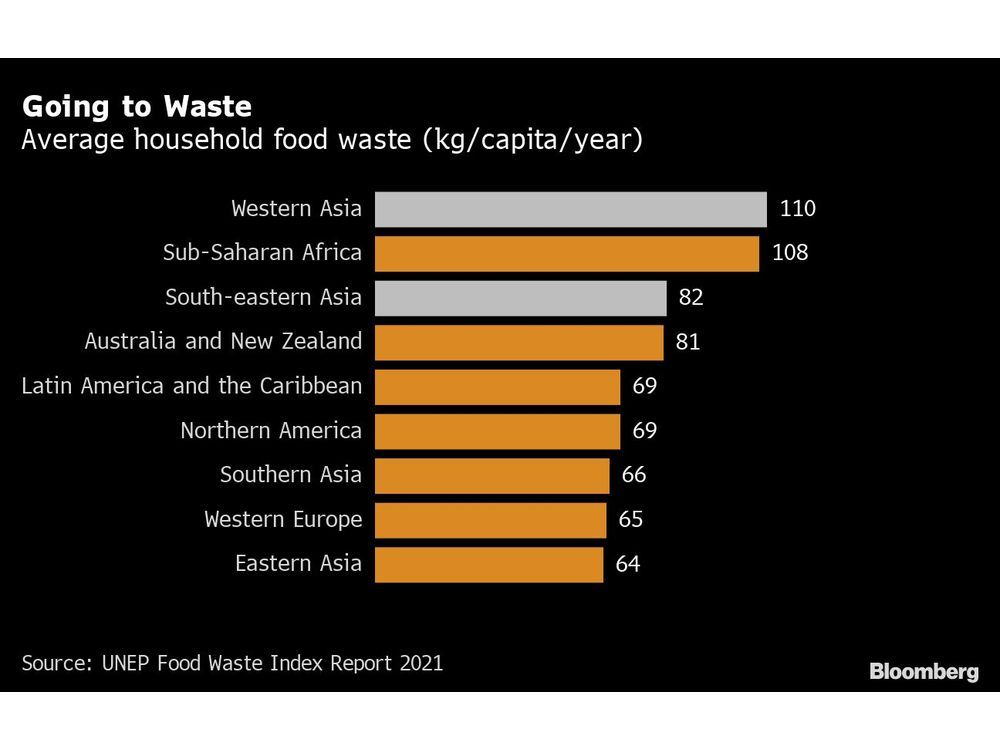 (Bloomberg) — With a mouth-watering array of satay chicken, wok-fried mud crab and chilled tiger prawns, the dinner buffet at Singapore’s Grand Hyatt hotel usually costs around $70. Those on a tighter budget with an eye for durability can fill a box for a 10th of that price.

Around a third of food is lost or wasted globally each year, and mountains of waste are estimated to cause 8-10% of greenhouse gas emissions like methane, according to the United Nations. The Asia-Pacific region is one of the worst in the world when it comes to food waste, accounting for more than half of the food wasted globally.

“A common mantra I have is that being sustainable must be achievable,” said Preston Wong, CEO and co-founder of Treatsure, which works with chains such as the Hyatt and Singapore Marriott Tang Plaza Hotel to enable app users to choose go out and collect a “buffet in a box” of food that would otherwise be thrown away. “I think technology can bridge that gap,” he said.

With more than 30,000 users, Treatsure has saved around 30 tons of food since its launch in 2017, with users typically having to wait until the service ends before they can collect their food, according to Wong. Still, that’s a far cry from the 817,000 tonnes of food waste in Singapore in 2021, a 23% increase from the previous year. Authorities say the city-state’s only landfill, Semakau, is expected to meet Singapore’s solid waste disposal needs through 2035 and beyond.

Hong Kong faces similar issues. It has already filled 13 landfills and about 3,300 tonnes of food waste per day was dumped at its remaining sites in 2020, according to Hong Kong’s environmental protection department.

“Space is very limited,” said Anne-Claire Béraud, Hong Kong manager of Phenix by OnTheList, an app launched in the territory last year. “It’s all very dense so there’s not a lot of space to deal with all that waste.”

The app allows users to pick up a “mystery basket” of food from stores such as Pret A Manger and local patisserie The Cakery for a minimum of 50% off.

So far, 25,000 baskets have been sold, each equivalent to around 1 kilogram of avoided food and 4.5 kilograms of avoided CO2 emissions, the company says.

The original Phenix platform was launched in France in 2014 and extended to four other European countries where it has saved 150 million meals. He collaborated with OnTheList, a flash sale company, to bring the app to Asia.

The concept of food sustainability is still in its infancy in Asia, compared to North America and Europe where authorities are cracking down. France has already banned supermarkets from throwing away unsold food and Spain recently drafted legislation to tackle waste by imposing fines on businesses. US states, including California and New Jersey, have passed laws aimed at reducing the amount of food going to landfill.

This has boosted the popularity of apps like Too Good To Go, which launched in Denmark in 2016 and now operates in 17 countries including the US, Canada and the UK. It has provided more than 152 million meals through its so-called magic bags, which are sold at a discount by shops and restaurants at the end of the day with items that would otherwise have been thrown away.

In a region as culturally diverse as Asia, small local startups are establishing themselves in their home market.

Businesses “must match the culture and habits of this region,” said Taichi Isaku, co-founder and chief product officer of CoCooking, which created the Tabete food rescue app in Japan. “This is an area that needs to be cultivated in order to successfully introduce new technologies.”

Tess Kermode, director of international expansion at UK-based Olio, agrees that companies need to “understand the culture and the people in a particular market”.

The company operates in 62 countries, including India, Sri Lanka, Nepal, Thailand and the Philippines. The app is primarily community-based, with neighbors posting free food to collect from their homes. So-called food waste heroes also collect excess produce from businesses and bring it home.

Olio claims the app has saved nearly 58 million servings of food worldwide. Its largest international market is Singapore, where it has over 125,000 users and a formal partnership with foodpanda’s online marketplace. The company has ambitions to grow but, like other apps, says a lack of food sustainability awareness in Asia is currently holding back growth.

“Consumer-facing technologies, such as apps on personal devices, can be very helpful,” said Anthony Bennett, senior food systems officer for the UN’s Food and Agriculture Organization in Asia- Peaceful. “However, this topic must be considered alongside increasing consumers’ overall food literacy.”

Some apps, including Treatsure and Tabete, are taking these issues into their own hands and trying to educate users with food waste reduction tips and recipes on their social media pages.

“In North America and Europe, there has been a certain maturity in understanding these challenges and addressing these issues,” Treatsure’s Wong said. “But in Asia, this narrative is just beginning.”

Sign up to receive the best daily stories from the Financial Post, a division of Postmedia Network Inc.

Thank you for your registration!

A welcome email is on the way. If you don’t see it, please check your spam folder.

The next issue of Financial Post Top Stories will soon be in your inbox.

We encountered a problem during your registration. Try Again