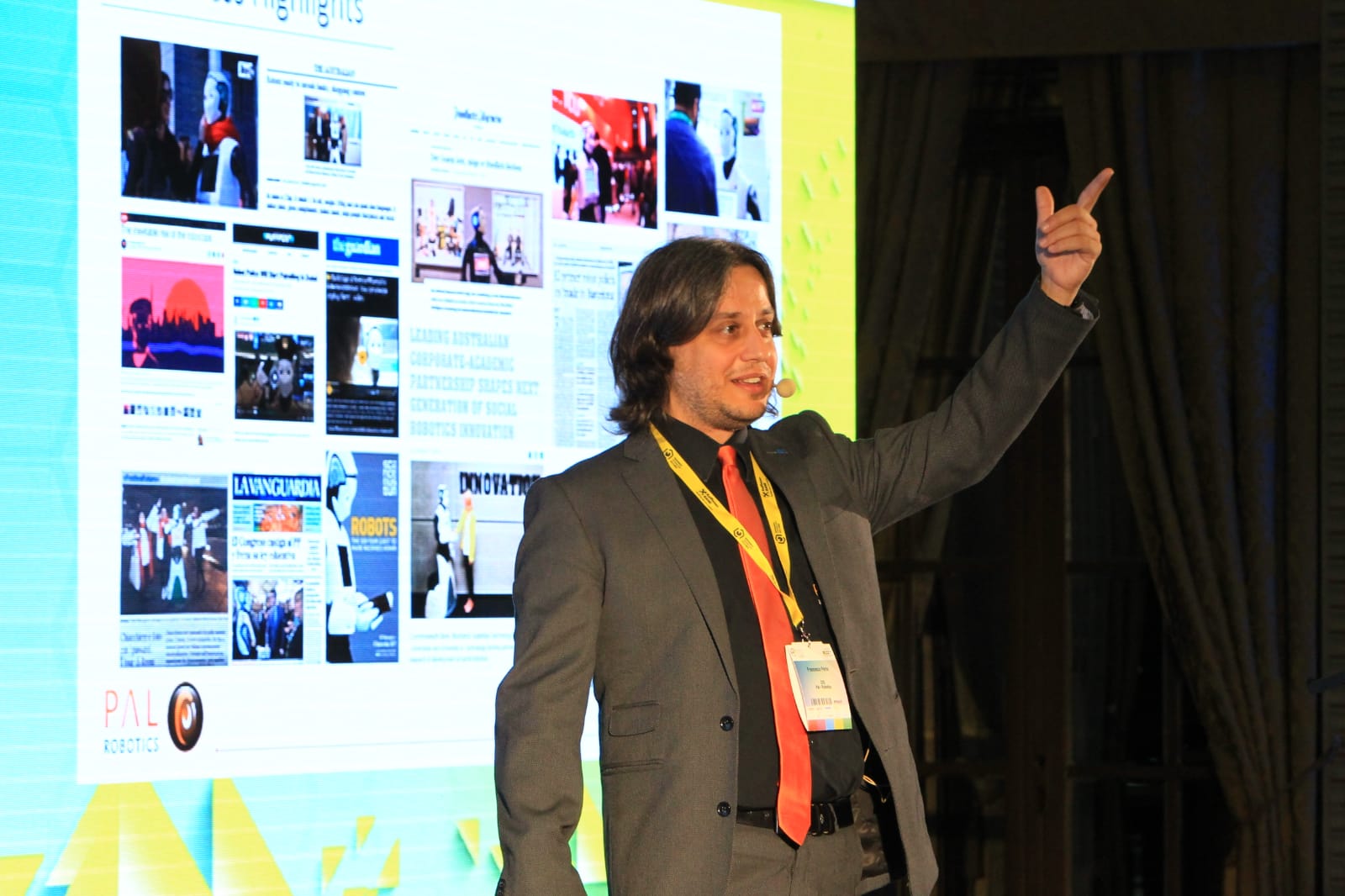 Of Italian origin, CEO and co-founder of PAL Robotics, one of the world’s largest robotics companies, Francesco Ferro grew up in Bari watching manga series featuring shapeshifting flying robots such as Gold Rake and Mazinger Z. With an engineering degree, an unfinished doctorate and many years of hard work later, he builds state-of-the-art robots in Barcelona, â€‹â€‹worth up to 900,000 euros, which improve and can even save lives.

As part of the closing remarks of his presentation at the sold-out session of the Bucharest Technology Week Innovation Summit (May 14-20), Ferro concluded by stating that the strong positioning of PAL Robotics in the market, which has taken off in recent years, comes down to three factors: passion, motivation and working with your client.

When we got together later, he was more than keen to develop this. â€œPassion for what you do is essential,â€ he says, â€œas is strong motivation, because you’re going to be putting in a lot of work. And just as important is to work closely with your customers. Engineers think they can do it all. But a customer comes to you because they have needs. And you can’t come up with a brilliant solution that doesn’t cover any need. Also, with technology not everything is possible, so if we continue to work with our customers, problems can be resolved easily, â€he says.

â€œThen,â€ he suddenly adds, â€œcomes the willingness to take risks. We are constantly taking risks because we are a disruptive company, â€he says. And few can dispute that. As one of “four Italians who moved to Barcelona and rented an apartment to start making robots for a customer in the United Arab Emirates (UAE)” – as he frankly describes the early days of the company – he is quite close to the definition of a risk by anybody – taker. The importance of staying ahead

After obtaining his telecommunications engineering degree from Politecnico di Torino (Italy), with a specialization in image processing and computer vision in 2002, and a master’s degree, Ferro enrolled in a doctorate which he dropped out. a year before the end. â€œI haven’t finished it. It was too boring, â€he says with the reassured smile of someone at the head of a company that made 4 million euros last year. â€œInstead, in 2004 I got together with Italian colleagues and went to Barcelona where we founded the startup. Bureaucracy was a challenge, â€he says. â€œTechnology and innovation move at high speed and bureaucracy cannot keep pace,â€ he notes. â€œYet Spain was faster thenâ€ than his native Italy, he said.

â€œNow it’s very easy, because everyone is talking about robots. But fourteen years ago, we even had trouble renting an apartment in the city after telling future owners that we were making robots for an Arab country. That’s why we changed our strategy and only succeeded after we started cheating and told everyone we were building a research company. We drew the first robots in a bar in Barcelona, â€‹â€‹”remembers Ferro, adding that” I always believed that robots could help humans a lot in what they do every day. To help us do things we don’t like to do as a futuristic Rosie “- he remembers the house robot in the cartoon series The Jetsons -” to do what we can’t do the way they do. in the industrial sector, â€he says. For Ferro and his team, making service robots was a deliberate choice, as was their strong focus on creating robots that could interact and work alongside humans. “We had a lot of proposals at one point, including from governments, who saw the skills of our team and offered us substantial sums of money to go and develop robots for use in the military.” , he recalls. PAL Robotics’ first robot, REEM-A, launched in 2006, was a first for the continent. â€œUnder a contract with a company based in the United Arab Emirates, which had also contracted a German company, we created the first autonomous bipedal humanoid robot, designed to play chess with the Hydra Chess engine,â€ says Ferro. â€œIt all started with the question ‘why don’t we also have a robot moving the parts?’ So they gave us a budget and we started to make a robotic arm. We created a fully autonomous robot that walked and moved parts, â€he says of the prototype, which served as a platform for walking, manipulating, speaking and seeing. The project was supposed to last a year, but the deadline had to be pushed back by two months, due to bureaucracy, Ferro says.

The first two robots, REEM-A and REEM-B were used for transport. The big selling point, Ferro explains, is that they were the first to be able to move slowly, in a controlled manner. Compared to those that were already on the market, “creating a bipedal robot capable of carrying weights and being reliable and working with people is a huge challenge,” he emphasizes, without neglecting the effort required. to create “a thin and fast robot. It’s just that it was a whole different thing. Since then our goal has been to make a robot compatible with working with people,” he says.

Towards a better match with the market

The team continued to create prototypes and in 2009 launched REEM-H, where the last letter stands for “hotel”. However, the market was not yet ready for a robot designed to become a receptionist. The price was still too high compared to employing a human, he explains. In addition, the status of robots still needs to be improved in terms of applicability. Currently, AI is helping that, but we’re not there yet, â€he says. â€œWe didn’t realize our business plan and tried to sell it. Our clients turned out to be research institutes and universities. Yet we have never stopped doing research in the field of bipedal robots.

The adjustment to the market took place a few years later. â€œIn 2013, we had a big contract with a REEM-C for research. This time we created a business plan, â€adds Ferro, who obtained an Executive MBA from the University of Barcelona in 2011 and took on the role of CEO the same year. The robot, available in the PAL Robotics portfolio, is fully equipped for human-robot interaction. Described as a “research platform that can be used to implement and test algorithms,” it can walk and climb stairs, and has full-body control, manipulation abilities, and visual and voice recognition functions. In line with the company’s new customer focus, the highly versatile REEM has found a whole new range of uses, which includes entertainment at events and conferences, providing information, acting as a receptionist and is frequently rented at high level events. â€œOne of the last uses of this model was as a policeman,â€ says Ferro, due to its ability to navigate large interior spaces with ease. â€œLast year we had a contract with Dubai Police,â€ he said, adding that the robots were used to help and educate people.

The advantages of using robots

“There are a lot of them, depending on the application,” says Ferro. â€œThe STOCKBOT for example, which automates and optimizes the inventory process in stores or warehouses, is the perfect replacement for someone who otherwise has to take inventory, a tedious task, at night.

â€œTIAGo, an acronym for Take IT and Go, allows great handling in workspaces and has the best uses in light industry and healthcare,â€ he explains of one of the models. the most sold of the company. â€œAs has been shown after being used in retirement homes for the elderly, the robot can improve the quality of life of people, for example, thanks to its camera which scans body temperature and indicates when someone is starting to get sick. In addition, it can provide the elderly with assistance that makes them independent and allows them to spend two to three more years at home before having to move to an institution, â€he says. â€œTo decrease the cost, we fitted it with just one arm,â€ he adds of TIAGo, which is also widely used in research, especially at the Polytechnic in Bucharest. PAL Robots models sell for between 20,000 and 60,000 euros, with their top model, TALOS, reaching 900,000 euros. TALOS, their top-of-the-range model, is a fully electric humanoid robot with sensor-based torque control in all its joints and using the EtherCAT bus protocol. â€œThe idea was to reinvent the way robotics is done. It’s a technologically advanced robot, â€he says. Only three units have been sold so far, and they have gone to universities. The first customer was the University of Toulouse, and it will be used with Airbus, in the production of airlines.

Do people trust robots? Ferro thinks so. â€œStudies show that in emergency situations people trust robots even more than people. For example, in the United States, a study showed that in the event of a fire, when people had to leave a place, as part of an experiment, most chose to follow a robot that was moving in the wrong direction. rather than a human showing the right way. “

“Can robots make mistakes? is the next obvious question. â€œYes, they can, because they’re pre-programmed by humans, and humans make mistakes,â€ he says. But they can also save lives.

â€œImagine all the good work robots could do in environments too dangerous for humans,â€ he said, recalling the case when, in the aftermath of the Fukushima disaster in 2011, people intervened at the site in their risks and dangers. â€œAfter Fukushima, they asked all companies to send robots to perform the task at the disaster site. But the technology was not there yet. So technology, when used in this way, can save lives.