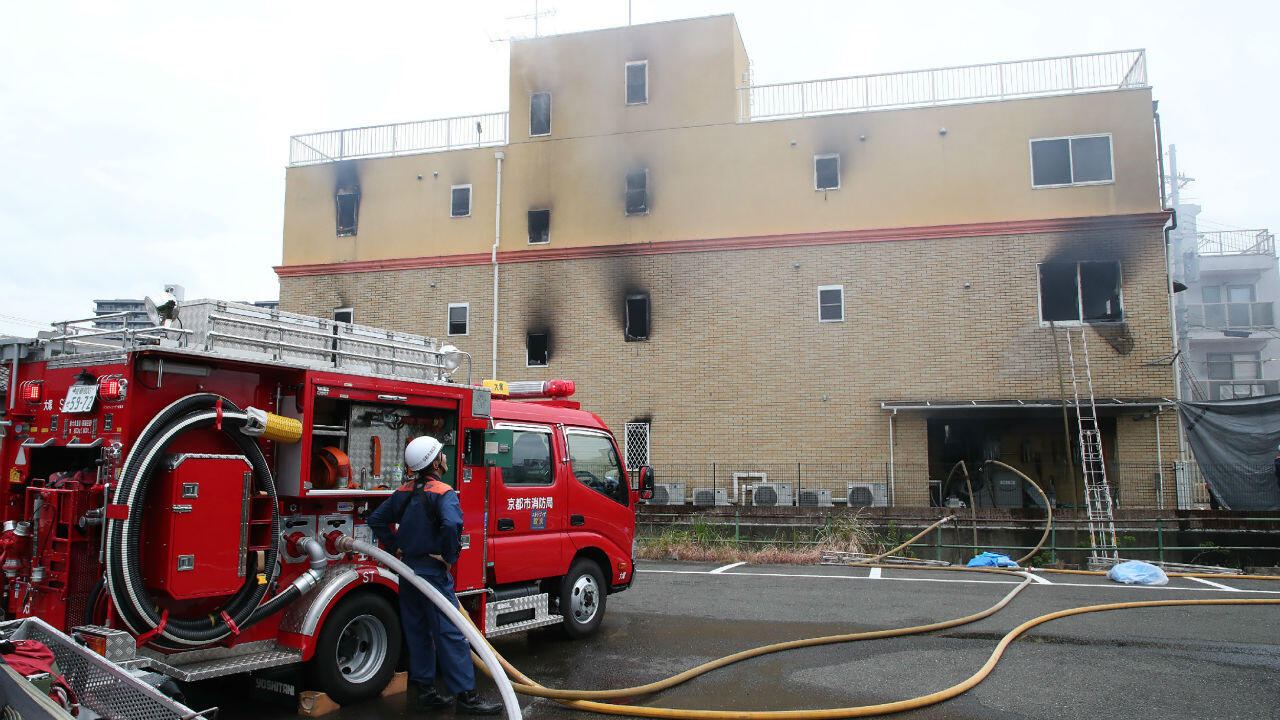 A man shouting “You die!” broke into an animation studio in Kyoto, Japan, and set it on fire on Thursday, killing at least 33 people, officials said, shocking anime fans around the world.

Most of the dead and 36 injured were employees of Kyoto Animation, known for its success stories featuring high school girls, with the locations featured in the stories even becoming “pilgrimage sites” for their fans.

The fire broke out in the three-story building in the former capital of Japan after the suspect sprayed an unidentified liquid accelerator, Kyoto Prefecture police and fire officials said. Japanese media reported that the fire could have been started near the front door, forcing people to find other exits and possibly delaying their escape.

Prime Minister Shinzo Abe offered his condolences and called the incident “too appalling for words” on Twitter.

Thirty-three people have been confirmed dead, a Kyoto city fire official said. Some of those injured were in critical condition. Authorities said firefighters are still looking inside the building in case someone else is left behind.

Kyoto police said the suspect was injured and taken to hospital for treatment. They are investigating the man, who is 41 and not a company employee, suspected of arson, police said.

A witness who saw the suspect being approached by police told Japanese networks the man admitted to spilling gasoline and lighting a fire with a lighter. She told NHK public television that the man had burns to his arms and legs and angrily complained that something from him had been “stolen”, possibly by the company. NHK footage also showed sharp knives that police recovered from the scene, although it is not clear whether they belonged to the suspect.

Survivors who saw the perpetrator stated that he was not their colleague and that he was shouting “(You) die!” when he spilled the liquid and started the fire, according to Japanese media. They said some of the survivors were splashed with the liquid.

Kyoto Animation, better known as KyoAni, was founded in 1981 as an animation and comic book production studio, and its hits include “Lucky Star”, “K-On!” and “Haruhi Suzumiya”. presence outside of Japan, although he was hired to provide secondary animation work on a 1998 feature film “Pokemon” that appeared in US theaters and a “Winnie the Pooh” video.

“Why the hell did such violence have to be used?” The company’s president, Hideki Hatta, asked as he condemned the attack. Hatta said his company had received anonymous death threats by email in the past, but responded “sincerely” each time, although he did not link them to Thursday’s attack.

Anime fans have expressed anger, prayed and cried for the victims of Kyoto Animation on social media.

Rush out of the smoking building

Witnesses said they heard bangs coming from the building, others said they saw people coming out blackened, bloody, walking barefoot, Kyodo News reported. Rescuers set up an orange tent outside the studio building to provide first aid and sort the injured.

“There was an explosion, then I heard people screaming, some asking for help,” a female witness told TBS TV. “Black smoke billowed from the windows on the upper floors, and then there was a man struggling to get out the window.”

Firefighters said more than 70 people were in the building at the time of the blaze and many of them ran outside.

The death toll surpassed the 2016 massacre in which a man stabbed and killed 19 people in an assisted living facility in western Tokyo.

A 2001 fire in Tokyo’s crowded Kabukicho entertainment district killed 44 people in Japan’s worst case of arson in modern times. Police never announced an arrest for starting the fire, although five people were found guilty of negligence. In 2008, 16 people died in a fire at a cinema in Osaka, near Kyoto.

(FRANCE 24 with AP and Reuters)