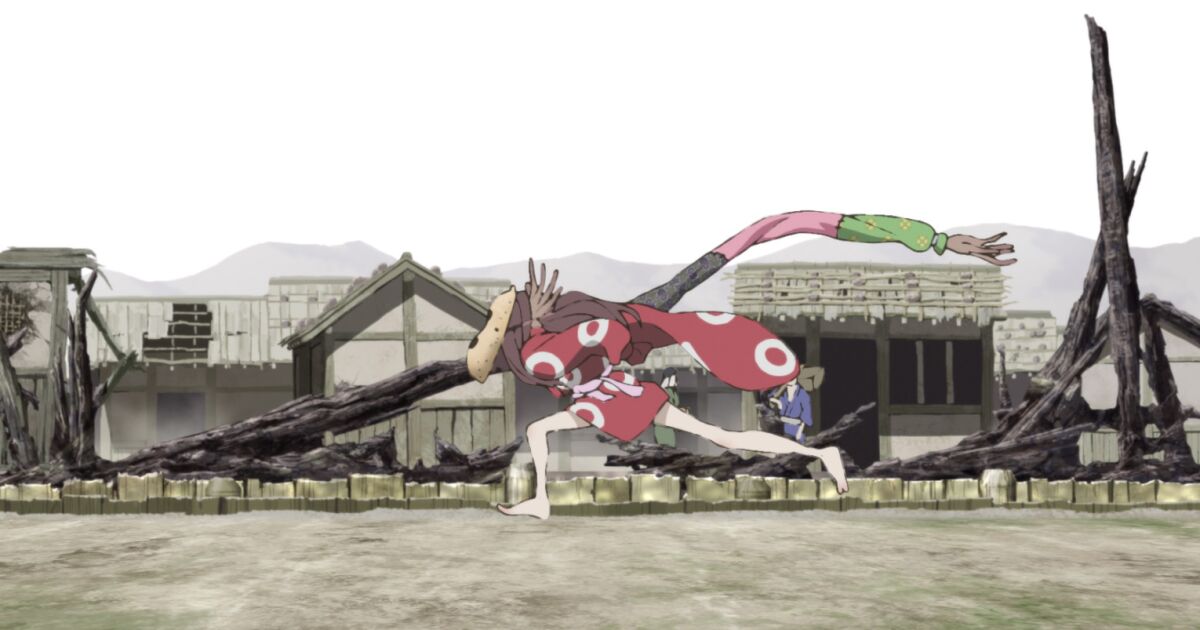 The ghost that haunts the eccentric Japanese rock opera “Inu-oh” isn’t the friendliest of creatures – not at first, anyway. Like most of the hallucinatory sights and transporting sounds in this anime feature, Inu-oh, as he is known, tends to shapeshift according to director Masaaki Yuasa’s whims. A former Noh dancer born under very mysterious circumstances, he bursts into frame on spindly human legs, an overgrown extendable arm bobbing behind him like a kite. Two oddly positioned eyes peer out from behind a gourd-shaped mask that conceals a face so terrifying it’s a wonder it doesn’t turn unhappy onlookers to stone.

Inu-oh, inspired by a real-life performer of the same name (and voiced by Queen Bee singer and songwriter Avu-chan), here takes on the misshapen form of a classic anime grotesque. But it also serves as a lesson to those it frightens, reminding them that specialness is not an inherent cause of suspicion or fear. “Inu-oh” offers its own welcome demonstration of this principle. A rich and unstable alloy of history, legend, musical pageantry and cinematic psychedelia, it builds a case for an art that expands the mind and shakes complacency in a world that often prefers the opposite.

While that world bears a huge resemblance to our own, it’s also the politically divided Japan of the 14th century against which “Inu-oh” is set. One of the concerns of Yuasa’s film is how conflict and tragedy are inscribed in folklore, and the specific role artists play in recording, distorting, forgetting and sometimes rescuing the story. Even as a war rages between the imperial courts in the north and south of the land, whispered memories linger of the Heike samurai clan, annihilated by their enemies, the Genji, in a furious battle at sea some 200 years later. early. (Their conflict was immortalized in the 12th century epic “The Tale of the Heike”; the film was adapted by Akiko Nogi from Hideo Furukawa’s more recently published novel, “Tales of the Heike: The Inu-Oh Chapters” .)

While the sunken Heike ships are regularly plundered by gold diggers, their real buried treasure, the film insists, lies in their wealth of untold and soon forgotten stories. The challenge of uncovering and telling these stories falls to Tomona (Mirai Moriyama), a traveling biwa player who grew up near this aquatic battleground, and Inu-oh, the unsightly outcast he crosses paths with. Years earlier, Tomona was blinded in a childhood accident, a tragedy that soon turns out to be fate. Unable to see – or be frightened by – Inu-oh’s face, Tomona joins forces with this strange, dancing demon. Together, they forge an unlikely musical alliance that will propel them onto the hottest outdoor stages in the country.

Against the backdrop of a relatively stuffy, strictly government-regulated musical tradition, Inu-oh and Tomona’s debut performance has the galvanizing effect of Bob Dylan going electric. In the most inspired shot of the film, the music festivals of Muromachi period Japan are transformed into their own rock scene, with glamorous androgynous musicians, head-banging crowds and, at one point, a magnificent projection of a giant, fiery whale. In its long mid-section, the film essentially turns into a concert film in which the performers unleash a series of banger ballads, each track telling a story about fallen Heike warriors, often set to a shaken beat of we-will- rock you. (Music is attributed to experimental musician Otomo Yoshihide.)

All this bold and heady arena-rock anachronism makes intuitive sense. Still, as a story about narration, “Inu-oh” can tend toward the diffuse. The busy, sometimes confusing plot rushes through a jumble of eruptive imagery, some of it dazzling up to the minute, others done in a more primitive, inky style. This isn’t the first time that Yuasa, one of the most free-style filmmakers working in Japanese animation, has used a wide range of visual styles to tell a story, as he did in his feature debut. 2004 feature, “Mind Game”. (His other fantasy-themed feature films include 2019’s charming surfer romance “Ride Your Wave.”)

But there’s a meaning to the filmmaker’s madness, and it’s not hard to understand. Inu-oh and Tomona’s friendship poses a threat to the ruling and warring Imperial order, their creativity granting them power that dictators can restrain but never wield themselves. And with each wildly applauded performance, Inu-oh’s countenance changes noticeably; he appears less demonically wacky and increasingly human, as if by restoring the Heike clans’ humanity he was also forging his own. It’s an effective metaphor for the transformative nature of art in a film that demands to be seen and heard, no less than the anguished and restless spirits it can barely contain.

In Japanese with English subtitles

Evaluation: PG-13, for violent and bloody images, and suggestive material