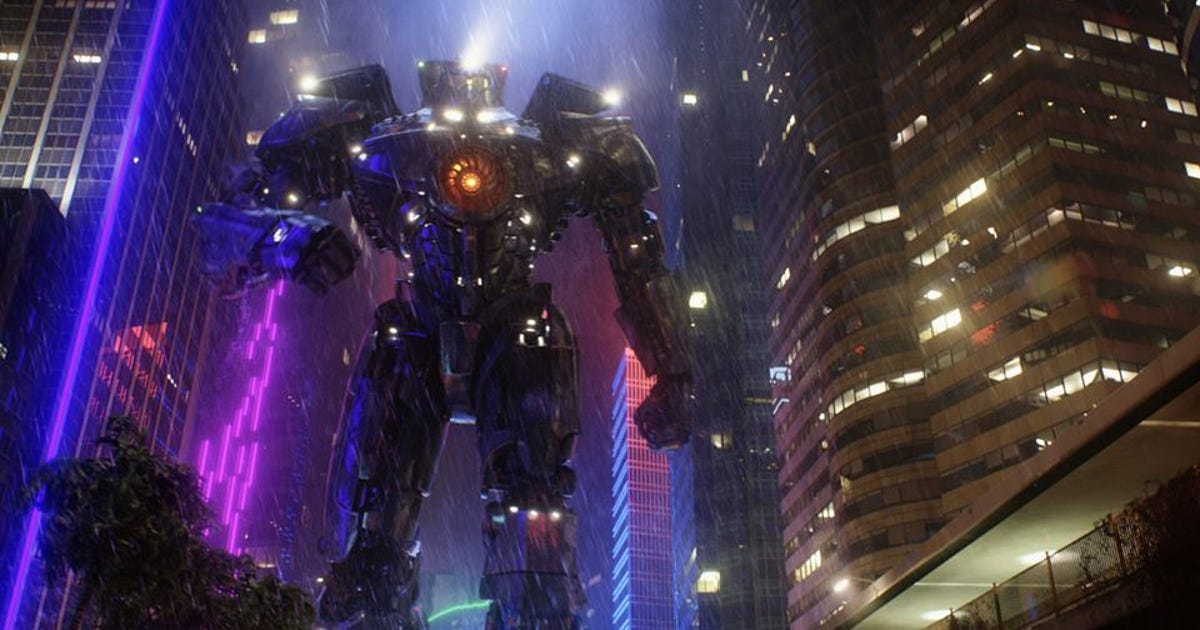 Is ‘Pacific Rim’ an adaptation of the Japanese anime ‘Evangelion’?

The scene: Tokyo is in ruins. A child is alone in the wreckage and terrified as a colossal monster approaches. The creature is constantly unleashed and the fate of the child seems sealed. Until a savior intervenes at the last moment.

Fast forward: The kid is introduced to an international military program that builds giant robotic machines to battle marauding alien monsters. But the machines must be operated by people with special neurological abilities. Naturally, the child has this power and is chosen to mount humanity’s last defense against invasion.

If you saw “Pacific Rim“Over the weekend you know this story. But it looks very familiar to you if you have also seen it”Neon Genesis Evangelion“, the hit 1995-96 anime series that redefined the giant robot sci-fi genre in Japan. What does Guillermo del Toro’s big-budget sci-fi slugfest owe to this franchise?

In Japan, “Evangelion” is a huge content and merchandise industry with hundreds of millions of dollars in revenue. Images of his biomechanical Eva robots are everywhere, from coffee mugs to smartphones and even airplane wraps. It is the story of teenager Shinji Ikari, who is recruited by an organization called NERV to become an Eva pilot and fight the invading monsters, called Angels.

“Pacific Rim” is of course derived from many Japanese franchises, from “Godzilla” and “Ultraman” to “Mazinger Z” and “Gundam”, which feature mecha (machinery) or Kaiju (monsters). But when I saw it the other day, I came away with the feeling that it vividly captures the story of animator Hideki Anno.

Both feature characters in love who enter and pilot giant machines in a global war against alien monsters, fighting epic battles in dense urban areas and on the high seas.

Pilots are immersed in amniotic fluid-like fluid to establish a psychic link with their machines, which are carried into battle by a fleet of aircraft. The main characters are haunted by a psychological trauma that initially prevents them from beating monsters. Check out the fan vid below for a scene comparison.

Most of the Jaegers, as the giant robots of “Pacific Rim” are called, are much more like the bulky samurai-style mecha from “Gundam” than the svelte, biomechanical Evas; pilots Raleigh Becket (Charlie Hunnam) and Mako Mori (Rinko Kikuchi) also wield a giant sword with their Gipsy Danger mech, another echo of Gundam.

Shocking and impressive tribute
But where “Evangelion” and its 1997 film “The End of Evangelion” are convoluted existential psychodramas wrapped in a “Power Rangers” formathttps://www.cnet.com/”Super Sentai” and peppered with Christian symbolism and father-son drama, “Pacific Rim” is truly a shocking and awe-inspiring homage to mechs and man-in-rubbersuit monsters. It doesn’t ask your brain to participate.

Filmed in Toronto, where a section of Elizabeth Street behind Toronto City Hall has been transformed to look like Tokyo, “Pacific Rim” pays lavish attention to visual detail. It features spectacularly designed mechs, captivating monster battle scenes, and settings reminiscent of Alaska, Hong Kong, and Japan.

“I felt there was a chance to do something new, something new that at the same time was aware of the legacy, but not a pastiche or a tribute or one of the greatest hits of all” , Del Toro told the LA Times last year. “One of the first things I did was not to check any old movies or any other references. Like starting from scratch.”

Strong cyberpunk aesthetic
“I really liked Evangelion, but I actually wrote most of Pacific Rim before I saw it,” fellow screenwriter Travis Beacham tweeted.

While some “Evangelion” fans might dispute the similarities between the two, ultimately “Pacific Rim” stands as its own movie despite the abundance of ideas it draws from the genre. It’s much more fascinated with kaiju and their gooey anatomy, it emphasizes a “Top Gun” style pilot rivalry, and it has a strong cyberpunk aesthetic. It references “Blade Runner” in a subplot, except for dozens of other franchises that are in the story’s DNA.

“Pacific Rim” has yet to open in Japan, but early otaku reviews seem positive. Metal Gear video game creator Hideo Kojima spoke positively about it on Twitter, even suggesting that it’s unpatriotic not to like it. After all, he has some of the coolest giant robots to ever see on screen.

Pacific Rim is the ultimate otaku movie we’ve all been waiting for forever. Who are you if you’re Japanese and you won’t watch this?


Get the CBS Culture newsletter