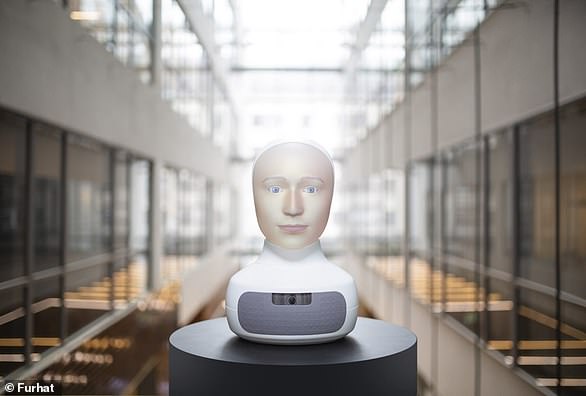 The weird and realistic social robot Furhat exudes empathy and warmth, encouraging people to open up more than they do to their friends, its creator claims.

The robot, a three-dimensional bust with a projection of a human face, aims to build on our newfound ease in speaking to voice assistants like Siri and Alexa.

Furhat does this by persuading people to interact with him as if it were a person, picking up our signals to establish rapport.

Yet precisely because it is not human and therefore free from prejudice, the robot can make people engage more honestly, its creator says, which makes it useful in situations such as the screening for health risks where people often lie.

Weird and realistic social robot Furhat exudes empathy and warmth, encouraging people to open up more than to their friends, claims its creator

The android can communicate with humans the same way we do with each other – by talking, listening, showing emotions, and reading changes in facial features.

Furhat combines digital assistant technology similar to Alexa or Siri and humanoid robots like Pepper from SoftBank to create the device of the new era.

It’s basically a disembodied head that can be personalized with different faces – even characters from the sci-fi movie Avatar.

A wide-angle projection system is built into the device, which allows it to display animated faces on the head.

The robot listens, speaks and reacts while maintaining visual contact with the user, thanks to a camera integrated into the device.

Furhat’s eyebrows move up and down or crinkle in confusion, while his mouth is able to arch into a smile or a grimace.