Japanese researchers have built a robot with brain-like neurons that have been grown in the lab, to teach it to “think like us.”

In experiments at the University of Tokyo, the compact robotic vehicle on wheels, small enough to fit in a person’s palm, was placed in a simple maze.

The robot was connected to a culture of brain neurons, also called nerve cells, from living cells.

When these artificial neurons were electrically stimulated, the machine successfully achieved its goal – a black circular box with LED lights.

A neuron, also known as a nerve cell, is an electrically excitable cell that picks up, processes, and transmits information through electrical and chemical signals.

About a tenth the diameter of a human hair, it is one of the basic building blocks of the nervous system. They carry stimuli so that a human can react to their environment.

The stimulation, for example the burning of the finger in a candle flame, is carried by the ascending neurons to the central nervous system and in return, the descending neurons stimulate the arm to remove the finger from the candle.

And every time the robot veered in the wrong direction or faced the wrong way, the cell culture neurons were disturbed by an electrical impulse to get it back on track.

The experiments, detailed in a new article published in Applied Physics Letters, mark a big step forward in the attempt to teach robots intelligence, the researchers say.

â€œWe developed a closed-loop system to generate a coherent signal from a spontaneously active living neuronal culture and embodied the culture with a mobile vehicle robot,â€ the authors state in their article.

â€œWhen the robot collided with obstacles or when its objective was not less than 90 degrees in front of it, electrical stimulation from an electrode was applied to the culture.

Artificial neurons from living cells served as a â€œphysical reservoirâ€ for the robot to make decisions. The neurons weren’t inside the robot itself, but nearby.

During the test, the robot received homeostatic signals to effectively tell it that everything was going according to plan and that it was making progress towards the goal.

However, if the robot encountered an obstacle, this homeostasis was disturbed by disturbance signals, causing the robot to shake and recalibrate awkwardly. 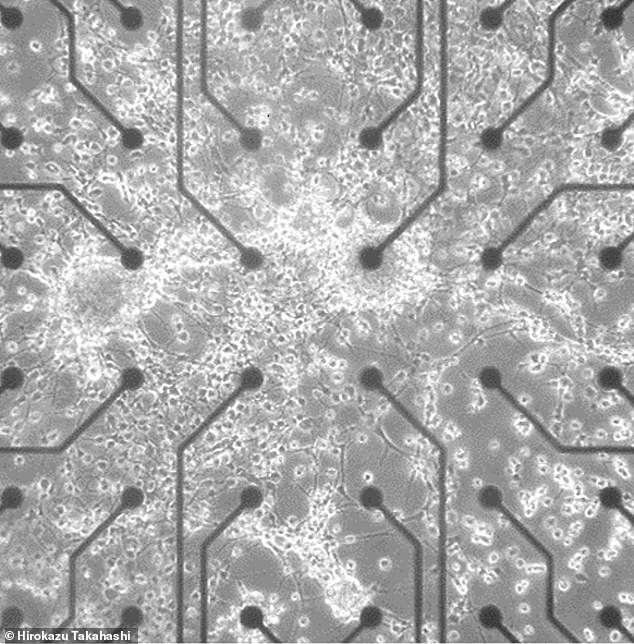 This is a photo of neurons on the electrode array that has been applied to cell culture. the robot and neurons communicate wirelessly

Researchers at the University of Cambridge have developed “mini brains” that allow them to study a fatal and incurable neurological disorder causing paralysis and dementia.

Mini brains help scientists see how disease is developing long before symptoms start to appear, and in turn search for potential drugs.

Read more: “Mini brains” cultivated in the laboratory and developed from patients with MND

Throughout the trials, the robot was continuously fed with the homeostatic signals interrupted by the disturbance signals until it succeeded in solving the maze task.

The robot could not see the environment or obtain other sensory information, so it was entirely dependent on the electrical impulses of trial and error.

It is the first robot to be equipped with a first-order Reduced and Controlled Error Learning (FORCE) algorithm (i.e. internal feedback loop) to teach neurons.

Researchers have shown that intelligent task-solving abilities can be produced by “physical reservoir computers” – a physical body (not necessarily a human) that performs calculations based on brain signals.

“I drew on our experiments to hypothesize that intelligence in a living system emerges from a mechanism extracting a coherent exit from a disorganized state or a chaotic state,” said the author of the study Hirokazu Takahashi, associate professor of mechanic-informatics at the university. from Tokyo.

Advances in the computation of physical reservoirs could help create artificial intelligence machines that think like us.

‘A brain of [an] A child in elementary school is unable to solve math problems on a college entrance exam, perhaps because the dynamics of his brain or his “physical reservoir computer” are not rich enough “, said Professor Takahashi.

A neuron, also known as a nerve cell, is an electrically excitable cell that picks up, processes, and transmits information through electrical and chemical signals (photo, artist rendering of neurons in the head)

â€œThe ability to solve tasks is determined by the richness of the repertoire of spatio-temporal models that the network can generate. ”

The team believe that the use of the physical reservoir calculus in this context will contribute to a better understanding of the mechanisms of the brain and could lead to the development of a neuromorphic computer.

A neuromorphic computer can mimic the neurobiological architectures found in the nervous system of a human.

THE POTENTIAL OF NEUROMORPHIC CALCULATION

Neuromorphic computing draws on our current understanding of the architecture of the brain and how it makes decisions.

Intelligent behaviors emerge from cooperation and competition between several regions of the neural networks of the brain and its environment.

This means that brain cells don’t work in isolation, unlike individual logic gates in processors which can perform millions of calculations, but all in isolation.

The developments in machine learning over the past few years are largely due to improvements in raw power for processing binary ones and zeros.

A neuromorphic computation design from American technology company Intel, called Loihi, takes a look at older, yet unproven technology, which functions more like the brain’s synapses by weighting information according to its value.