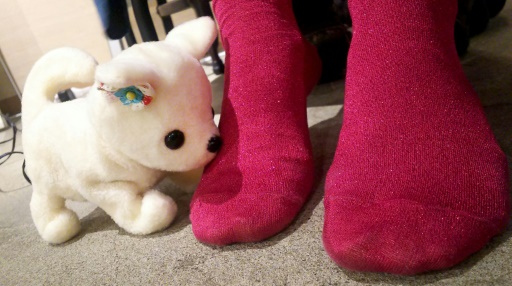 Do your feet smell bad? Just a little or absolutely awful?

If you dare not ask a friend, a Japanese startup might have the answer with a new robot dog that will sniff your feet and give you a ruthlessly honest verdict, or even pass out if the stench is particularly strong.

Smelly feet can be socially troublesome in Japan where shoes are taken off at the entrance to every house.

Hana-chan – a play on the Japanese word for “nose” and a common girl’s nickname – is a useful little robot dog who will bark if she detects moderately swollen toes, but crumbles if the pong is particularly pungent.

The 15-centimeter (6-inch) dog, fitted with an odor detection sensor for a nose, also sprays an air freshener to resolve the situation if the aroma is unbearable.

Manufacturers Next Technology created the robot in response to a request from a man who desperately wanted to know if he had a problem.

“He told us that his daughter said his feet smelled bad … But he didn’t want to know how bad the smell was because he would feel hurt,” said employee Kimika Tsuji.

“That’s why we developed this cute robot.”

Tsuji said odor is becoming more of a problem in Japan, a place where subjecting others to your honking body can even be considered harassment.

In July, Konica Minolta, a Japanese tech company, began pre-sales of a handheld device that allows people to test three categories of odors themselves on a scale of 0 to 100.

This document is subject to copyright. Other than fair use for private study or research purposes, no part may be reproduced without written permission. The content is provided for information only.