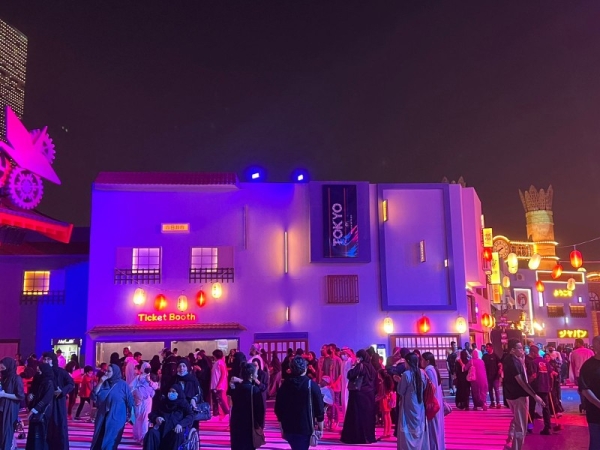 JEDDAH — Japanese Ambassador to Saudi Arabia Iwai Fumio was amazed at the size of the “bustling village” in Jeddah Season during his visit to the area on Monday.

Speaking to Saudi Gazette, the ambassador said, “I’m very impressed with the size of Anime Village, and it reflects Saudis’ interest in anime and Japanese culture, and I hope we we’ll see more exchanges between countries.”

The Ambassador was briefed during his visit to Jeddah Season city promenade area about the most important world events and experiences.

Fumio, who has served as the Kingdom’s ambassador since December 2020, pointed out that the promising tourism, cultural, historical and civilizational potentials make the Kingdom a global tourist destination.

He expressed his happiness with the Japanese shows featured as part of the season’s activities.

“I’m only staying one night in Jeddah, I won’t be able to enjoy performances by Japanese artists, but I imagine this season offers many opportunities to experience Japanese culture through these concerts,” he said. added.

He praised Jeddah Season for its careful geographical distribution of event venues and its commitment to ensuring that the events held are suitable for people of all ages.

Saudi interest in Japanese anime started since the 80s, with the dubbing of many popular anime shows and broadcast on TV channels.

So some Japanese anime was more popular here than in Japan, like UFO Robot Grendizer, which was extremely popular in the Arab world but not so much in Japan.

Many of them, like Hayao Miyazaki’s Future Boy Conan (also known as “Adnan & Lena”) and Captain Tusuba (“Captain Majed”), have become part of Saudi pop culture.

The rise of new dubbing houses in the late 1990s and early 2000s increased anime’s influence in the region.

The community has grown bigger than ever with the advent of social media platforms and the presence of anime reviewing YouTubers such as Ai Show, Planet B-612, Maher Mosly, and Filmmer.

Additionally, streaming services that cater to these audiences, such as Netflix, have also attracted interest from Audis. They dubbed some of Hayao Miyazaki’s movies, such as Kiki Deliver Service, and brought back old anime with its original dubs, such as Princess Sarah.

Crunchyroll is the best-known anime-based streaming service, MBC’s Shahid has provided many current anime as well as old favorites to Saudi Arabia and the Arab world in general.